After Zipper came months of searching for a new horse. I am tall so there was the height issue, then he (or she) also needed to meet the other requirements of good confirmation, attitude, and ability. We had already vetted two horses who hadn’t passed, so when my trainer found two horses at the same location and I had a friend also looking for a horse, she just had both vetted to start with. Both horses passed then were trailered in for a trial. Phoenix came off the trailer and more than met my expectations. A flashy appendix paint with three tall white socks and a big blaze. He was 8 years old at the time and had been ridden exclusively by a trainer as her personal horse. Two days later was a schooling show at the barn and riding him in it would be a good test. We had immediate chemistry and got champion that weekend and he was here to stay. Like Zipper he proved willing to do just about anything, but was more athletic when it came to jumping. We did hunters and equitation, trail rides, and contesting on the high school equestrian team. Until I got older I never realized how often I rode. I rode him six days a week, sometimes twice in a day in the summer if a second person showed up I wanted to ride with. He was always happy and playful, known for calling for me when I went in the tack room and flipping up his lip in a bid for more treats. He would follow behind me without a lead rope and jump over jumps on his own if loose in the ring.

The end of my senior year came and much to my dismay he was for sale. He hadn’t sold yet when I left for college, but I mostly stayed away because it was much too hard. He ended up with a girl who was doing 4H, and they taught him how to do some western stuff as well. I tried to forget about him and kept my riding down to leasing horses in the summer when I came home.

After college I got my own place and a big girl job and bought myself a new horse, Stampede. Life moved on and he became my project. Then in 2010 I went through some old photos and put some on facebook, including pictures of me and Phoenix. I got a message from a girl that said a mutual friend of ours on facebook showed her the pictures and she was the girl who bought him years ago and would I like to come see him. I was torn about seeing him again, but I went. He was 21 by then and I didn’t really know what to expect.

We got to the barn together and we walked out to get him. I’m not sure if he recognizes me, he seems very dull and quiet. He is missing patches of hair all over his body and his feet are so long he shuffles when he walks. I knew he couldn’t stay. He never really showed much of his old personality that day, which was always in your face and silly. The girl’s dad joked that I could take him home with me and I replied that I would check with my family.

As soon as I started talking to my husband and dad, they knew he wasn’t staying where he was. My dad went with me to go see him that weekend, and we cleaned him up some and took him out for some grass. A month of back and forth, and a friend with a trailer later and Phoenix became mine again, almost 9 years later. 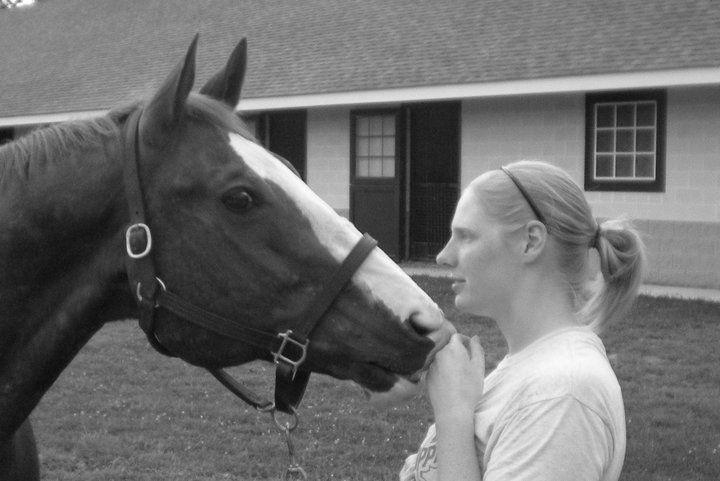 The day after Phoenix came home.

“If he were only a memory I could call him back – horse of my childhood who continued with me into womanhood. But he outstrips memory, runs through my veins, pulses luxuriously like the still yet trembling fissure of halloed light around a full moon on a blue-black night above hemlocks.”

It’s been cold and tax season is ramping up. Tre

Just a cute pony in the snow. #vinny #morstoneacre

I think there is a rule that you must take picture

Enjoyed a nice field wander after our ride today.